I ran because I liked the way it hurt. Not in the Nike-Just Do It-way, but in the I-really-need-to-increase-my-therapy way. Running started in earnest in early October as an agreement with my husband. I had been diagnosed with PTSD, gotten married, moved 45 minutes away from all my friends, and quit my difficult job. I couldn’t let my body atrophy while my atrophied soul received its care. Ted said I could honor my soul’s suffering and not get another job as long as I did a little running.

I think he hoped for the endorphins, hoped my eating disorder would not return, and hoped running would help me stop crying before he got home from work. I hoped for the pain that undoubtedly comes to out of shape runners. The squeezes in your heart, the aching knees, the cold throats, the frozen lungs, the yelling muscles, and my jolt of pain that reminded me that my ankle is still bumming.

For months I fought for two 15-minute miles but I savored ever searing step. When my vision clouded with black pain I’d ask myself, “Is this a real injury* or am I just losing to the pain?” Most of the time I was just losing so I kept fighting and kept moving. Sometimes the girls from church would suggest running together; I always turned them down because I knew they wouldn’t run my way.

I needed the pain; it made me feel alive. Instead of the heavy deadness and apathy, instead of the numbing disassociation, instead of the unexplained tears that stayed for hours, instead of watching the world move around me without me: I was connected. I felt part of the life unfolding around me. I could fell my body, I could feel my self. I understood this hot pain and wasn’t afraid of it. I was in control of it. You can say it was my version of cutting.

I bring this up now because I just ran four twelve-minute miles. I didn’t fight the pain–I didn’t want the pain. And I didn’t notice until I finished how much better running is when I don’t run for the pain. My heart must be slowly healing, slowly recalibrating from the disorienting force of trauma. Now if only my busted ankle would heal, too. I only stopped once and that was to snap the moon over the city. 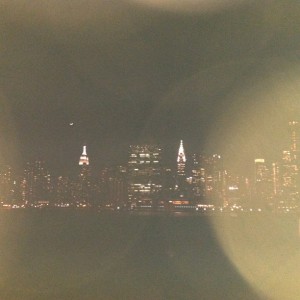 *because I’ve broken or injured a total of 9 bones and have had multiple sprains, strains, and concussions